The UK’s New Stewardship Code: a step forward or sideways?

In January of this year the regulatory authorities issued a Consultation Paper relating to the forthcoming release of an updated Stewardship Code to replace the earlier 2012 version. This document explained the background and proposed changes, and included the draft new Code, and it invited comments prior to the new Code coming into effect later this year.

Additionally, a Discussion Paper was published asking for views on how the incorporation into UK law of the 2017 EU Directive encouraging long term Shareholder Engagement might be implemented with the new Stewardship Code’s principles in mind.

We thought it would be interesting at this point to consider the proposed new Code in relation to its stated purpose and in the context of the recently updated Corporate Governance Code.

The revised Code defines Stewardship as “the responsible allocation of capital across the institutional investment community to create sustainable value for beneficiaries, the economy and society”.

It says that the Stewardship Code is for “asset owners, asset managers and entities providing services to the institutional investment community, including: investment consultants, proxy advisers and other service providers that want to demonstrate their commitment to stewardship”.

Institutions in the investment sector are expected to demonstrate their compliance by becoming accepted by the regulator as “signatories”, which involves them submitting a Statement to the Financial Reporting Council (FRC) which identifies them as asset owner, asset manager or service provider and discloses how their appropriate policies and practices qualify them to be accepted as a signatory.

The sections of the Code consist of:

How does it relate to the CG Code?

As the much younger sibling of the Corporate Governance Code, the Stewardship Code appears to aspire to copy its older brother. So the layout consciously aims to mirror that of the older Code, as structured in its latest 2018 version, setting out broad principles with more detailed provisions putting flesh on the principles and further layers of guidance to follow.

However, whereas the latest version of the Corporate Governance Code has deliberately gone for simplification, in a move back towards the four sections and nineteen paragraphs of Sir Adrian Cadbury’s Code, the new Code is still in expansion mode. The 2012 version had seven Principles which, with Guidance, covered five pages. The new Code has ten Principles, but twenty-seven Provisions and a further twenty-seven Guidance notes and covers fourteen pages.

Beyond this, whereas the approach of the Corporate Governance Code is to set out how it believes a company’s board should constitute itself and how it should behave, the Stewardship Code appears to be trying to set out how the entire investment industry should manage itself. And this in fourteen pages.

Moreover, reading the Discussion Paper jointly issued by the FRC and the FCA, regarding new regulation, it is clearly stated that one of the objectives is to make the UK’s investment industry compliant with the EU’s updated Directive addressing Shareholder Rights*. This Directive is a serious piece of bureaucracy which we may address in a later article, but the taint of officialese seems to have infected the approach to the new Stewardship Code.

This may be very worthy, and a policy to be supported. Indeed a wider interpretation of stewardship is warranted. But not one exclusively aimed at institutional investors and, as we will come to, the wider application of such a definition is already covered in existing corporate governance codes and regulation.

As we have written before, at length, the concept of stewardship goes back to a pre-industrial age, when the owner of a property placed its day-to-day management in the hands of another party. A good steward looked after the interests of the owner and accounted for his/her actions at the end of the day. In the later industrial age, the creation of limited companies and the evolution of capital markets led to the separation of ownership of the new manufacturing businesses from their management, and gave rise to the so-called principal/agent problem – stewardship by another name.

The current interest in stewardship arose from the huge growth of professionally managed savings funds invested in publicly listed companies. In this environment, the ultimate investors (in the funds) had no direct contact with the companies in which their savings were invested, but the governance of those companies was coming under the spotlight, and the owners were deemed to have a responsibility. But the owners (described in the proposed new Stewardship Code as the ultimate beneficiaries) were represented by the investing institutions, and through them by the asset managers. So the stewardship role passed to the investment professionals rather than the boards of the companies in which the owners had invested.

But this is where the purpose of the stewardship role starts to get muddied, and confused with corporate governance in both the investment industry and the investee companies.

Surely the purpose of the investing institutions is to look after the interests of the ultimate investors, and that is what their stewardship role is all about. The origin of the word certainly suggest so, as the word ward (of similar origin to the word “guard”) indicates, with the first part deriving from a word meaning house.

Ensuring that the investment industry works properly, and, more-so, fulfils the aims of government policymakers, may be in the interests of the investing public, but is nothing to do with stewardship per se.

We have written earlier about the interest that the investing institutions should have in the governance of the investee companies, since bad governance in these investees will ultimately reflect badly on the investor companies. The practical problem is that only the biggest funds will have the necessary resources to engage in any meaningful way with any significant number of their investees.

So, to sum up, our concern is that the worthy aim of improving stewardship by the investment industry (best practice in looking after investors’ funds) is being confused by attempts to change the way the industry operates (ESG and climate change, for instance) and risks being mired in bureaucratic regulatory practices (lists of operational management processes arising from the EU’s Directive).

Is this the best way forward?

Plainly, our answer is no. It’s time we took a clear view of the separate roles of each of the parties involved in this investment industry. The Discussion Paper on Building a Regulatory Framework uses a simple diagram to illustrate the relationships between what it describes as Beneficiaries, Asset Owners, Asset Managers and Issuers (investee companies). 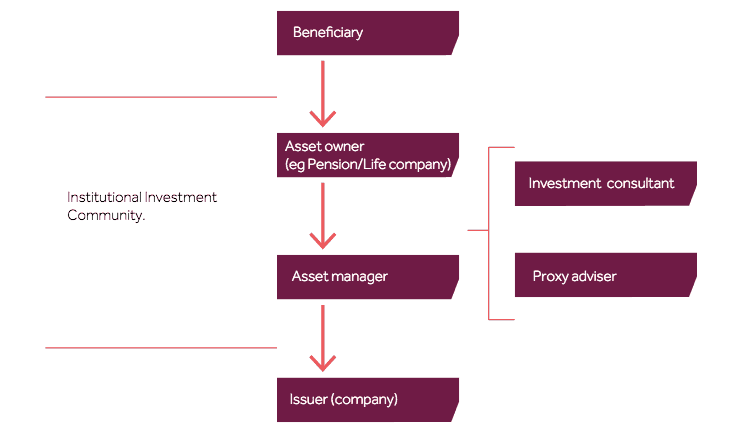 A simplified view of the institutional investment community. FRC DP19/1: Building a regulatory framework for effective stewardship (click the image to view the discussion paper on the FRC website).

This diagram shows the distance between the original investors (beneficiaries) and the companies in which they are ultimately investing (issuers). Really, the directors of the investee company are the stewards for the original investors. But under the most recent Companies Act 2006, the directors have a clearly defined responsibility under Section 172 to look after the long-term interests of the company itself, taking account of ALL the relevant stakeholders. So the shareholders are very important, but only one of the parties to whom the directors are accountable.

Hence, the shareholders are justified in exercising an influencing role over the company, and maybe have a moral obligation in certain circumstances to do so, but that’s as far as it should go. However, the key stewardship function, surely, is limited to how the investing institutions look after the interests of the investors in their funds. How the independent legal entity of a limited company, coupled with its wider responsibilities to a broad group of stakeholders, maps on to the ability of its shareholders (in principle) to vote the directors off the board and replace them by their own appointees, is something that the UK’s company law hasn’t properly addressed in the last hundred years.

In practical terms, surely the elements in this picture need to be dealt with separately.

Starting with the original investors (beneficiaries): their interests should be safeguarded by consumer legislation. To consider allocating a responsibility to them regarding the corporate governance of the companies in which they are ultimately invested seems completely impractical.

Looking at the efficient functioning of the investment industry and its compliance with latest political priorities: this ought to be dealt with by industry regulations, covering codes of conduct, separation of roles etc. One can then look at the responsibility of investing institutions as stewards of the funds invested by the original investors, but this should be limited to safeguarding those investments and achieving the best result possible for the investors, within the policy criteria associated with the particular funds, such as risk and return.

Separately, considering their responsibilities as owners in the investee companies, while we clearly welcome a widening of the definition of stewardship to include our universal duty to society and the planet, this should be dealt with under the provisions of the Companies Act and the Corporate Governance Codes.

Regarding the asset managers and the service providers, their behaviour should be covered by the Corporate Governance Code and relevant industry regulations.

Finally, the behaviour of the ultimate investee companies is clearly covered similarly by the Corporate Governance Code and relevant industry regulations.

This all seems a straightforward approach which avoids the confusion of the current approach to Stewardship. But there is a further aspect, which we always refer to in regard to the Corporate Governance Code. That is, the need to establish metrics to measure performance, and a reliable way to measure performance of players in an industry. Nowhere is this aspect addressed in the new Stewardship Code, and the result will, inevitably, be even more boilerplate verbiage in annual reports and no perceptible improvement in Stewardship, except in relation to boxes ticked.

Yet another attempt to reform the audit profession

Bank Bonus vs the People: perception is reality...